We Go a Long Way Back

In 1960, being in the plumbing & heating business, John Keffer decided that the fuel oil business would be a natural fit for expansion, and would provide custo 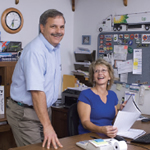 mers for whom he would have ongoing sales.

A neighbor, Merlin R. Miller, put up some money, along with John Keffer, and the Miller & Keffer Oil Company was born. Supply arrangements were made with Phillips 66, and the first year sales were $10,000.00.

In 1965, John Keffer purchased a gas station and small store at Mt. Pleasant Road & Centerville Turnpike, in Chesapeake, VA. This was the first service station served by Miller & Keffer. The look of this station has changed over the years, but it remains one of Crossroads’ best gasoline accounts, and is the longest continuously operated gas station in the City of Chesapeake.
In 1967, Keffer bought Miller’s half of the partnership, and with Keffer as the sole owner, changed the name to Crossroads Fuel Service – named for the intersection of Mt. Pleasant Road and Centerville Turnpike.

The company continued to grow slowly, with Keffer working full time at the Norfolk Ford Assembly Plant, and operating the oil company on the side, with part time help, including his son, Alan.

In 1971, the business was incorporated as Crossroads Fuel Service, Inc. Keffer left the Ford Plant in 1972, to devote full time to the business.

1973 brought another milestone, when the business expanded to Elizabeth City, NC, with the purchase of a small Phillips 66 Jobber and a Citgo Jobber, which nearly doubled the overall size of Crossroads.

The oil shortage of the early 70’s, presented challenges unseen before in the oil industry. With hard work and a good relationship with both Phillips 66 and Citgo, business increased another 25%. At a time when many small oil jobbers were going out of business, Crossroads was expanding.

Other companies were purchased by Crossroads over the years, expanding its marketing territory to where it now includes 12 Northeastern NC counties, as well as Tidewater, VA, where the home office is still located.

Crossroads Fuel has been a Jobber for Phillips 66, Citgo, Amoco, Gulf, Unocal 76, as well as for their own licensed brand, HiLo.

By the mid 70’s, Marilyn, Lynn, and Eric Keffer had joined the company, and Crossroads continued to grow at a steady pace, while transitioning management to the second generation. John and Dana Keffer had ten children, all of who worked in the business at one time or other – some for short periods, and some much longer. Of those longer term, most notable are:

Alan, who was instrumental in the early years’ growth, and worked at Crossroads several different times over the years;

Marilyn, who began working, part time, in 1968, and is now the Secretary-Treasurer;

Lynn, who came to work at Crossroads in the mid 70’s, and has worked here full time, continuously, since then – now the company President;

Eric, who joined the company in the late 70’s, and left in the late 90’s, to pursue his own business. Eric played a large role in the expansion into the propane business, beginning in 1992, and played a key role in the propane division until his departure. Sadly, Eric passed away unexpectedly, in 2011.

The propane division has grown from a dream - with one used delivery truck, and a tool box on the back of a pickup truck – to a fleet of trucks, five bulk storage plants, and more than 2,500,000 gallons a year in sales. The founder, John W. Keffer, passed away in 1996, leaving a legacy of hard work and generosity. Crossroads has continued to expand since his death, and we find ourselves referring to events in the company, as before Daddy passed away, and after Daddy passed away.

Under the direction of the 3rd generation (now active in the business), Crossroads has expanded what began as hauling a few loads for competitors, as a favor, to a growing Common Carrier division.

This 3rd generation of Keffers now involved in Crossroads’ management, are:

Crossroads now has office and storage facilities in Chesapeake, VA and at five NC branches – Hertford, Sunbury, Columbia, Ahoskie, and Plymouth.
From the humble beginning of two part time partners, and first year sales of $10,000, to an employee force of more than 50, and sales in excess of 25,000,000 gallons a year, Crossroads Fuel Service, Inc. is still a family business, doing business with friends and neighbors.